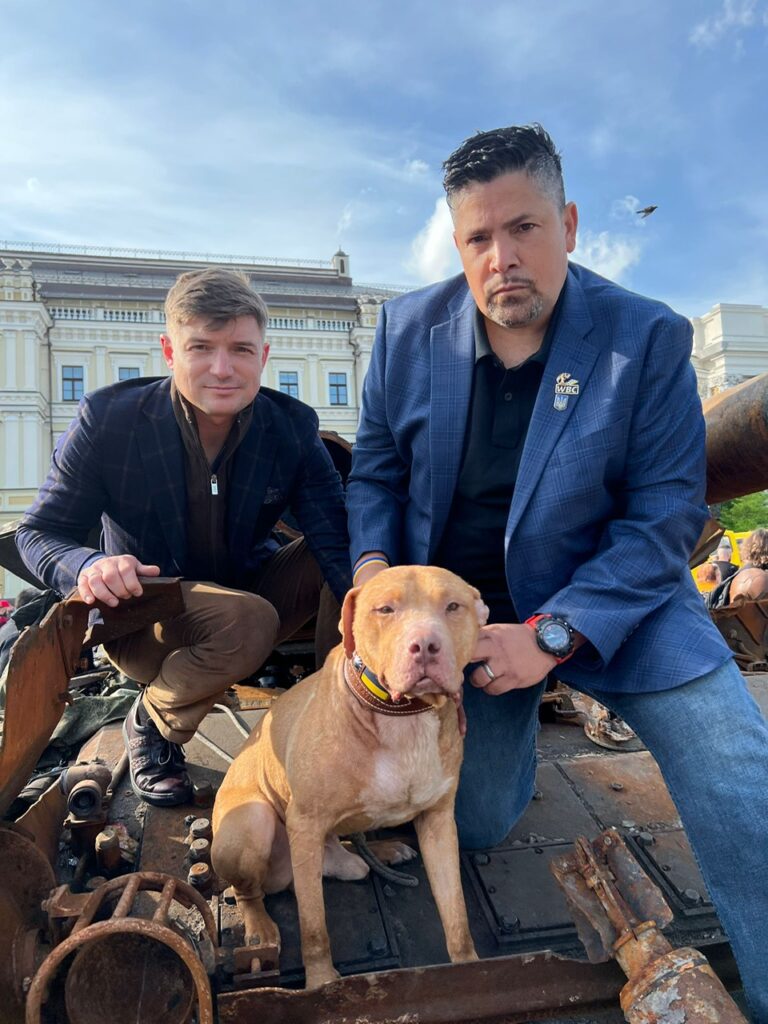 Attacked by the Russian Army, and he never gave up

This is the life story of this sensation dog! Wait for it , You would love it !

Strap to your seats as you will be treated to a fantastic story and a significant chapter in the glorious history of the American Pit Bull Terrier.

The Golden Vein dogs, named by Richard Stratton as the Modern Old Family Red Nose.
Our breeding program is built around the legendary Chico Lopez’s Awesome Buck.
Back in 1994, Chico Lopez had the vision to use a combination of the best member of the Aycart dogs x the best of the honeybunch dogs. Joker a son of Mechanic (son of Ronnie), a Littermate sister of Rocca’s Stonewall, and Cheyenne, the dam of Awesome Buck.
Nearly two decades later, that combination inspired us to breed a daughter of Awesome Buck to the frozen Semen of Mechanic to create a fantastic producer, Mechanic Buck.
Athos and his littermates are from Mechanic Buck x Deadly Speed, a daughter of Damian and a Redboy female. An important litter using the formula of Awesome Buck as the catalytic dog.
The influence of successful breeders such as Victor Aycart, James Crenshaw, Katy Marlowe, Ernest Hollingsworth, Flecher Chavis, Maurice Carver, Bobby Holland, and Frank Rocca were the basis for the background of these dogs and, later, the members carefully selected to build this bloodline. We were creating the next generation of legendary pets constructed during the 30 years journey of the Chico Lopez family of dogs.

Athos from Bucha and Rakata is an example of courage, loyalty, friendship, never give, and character for both APBT and the men who create them. 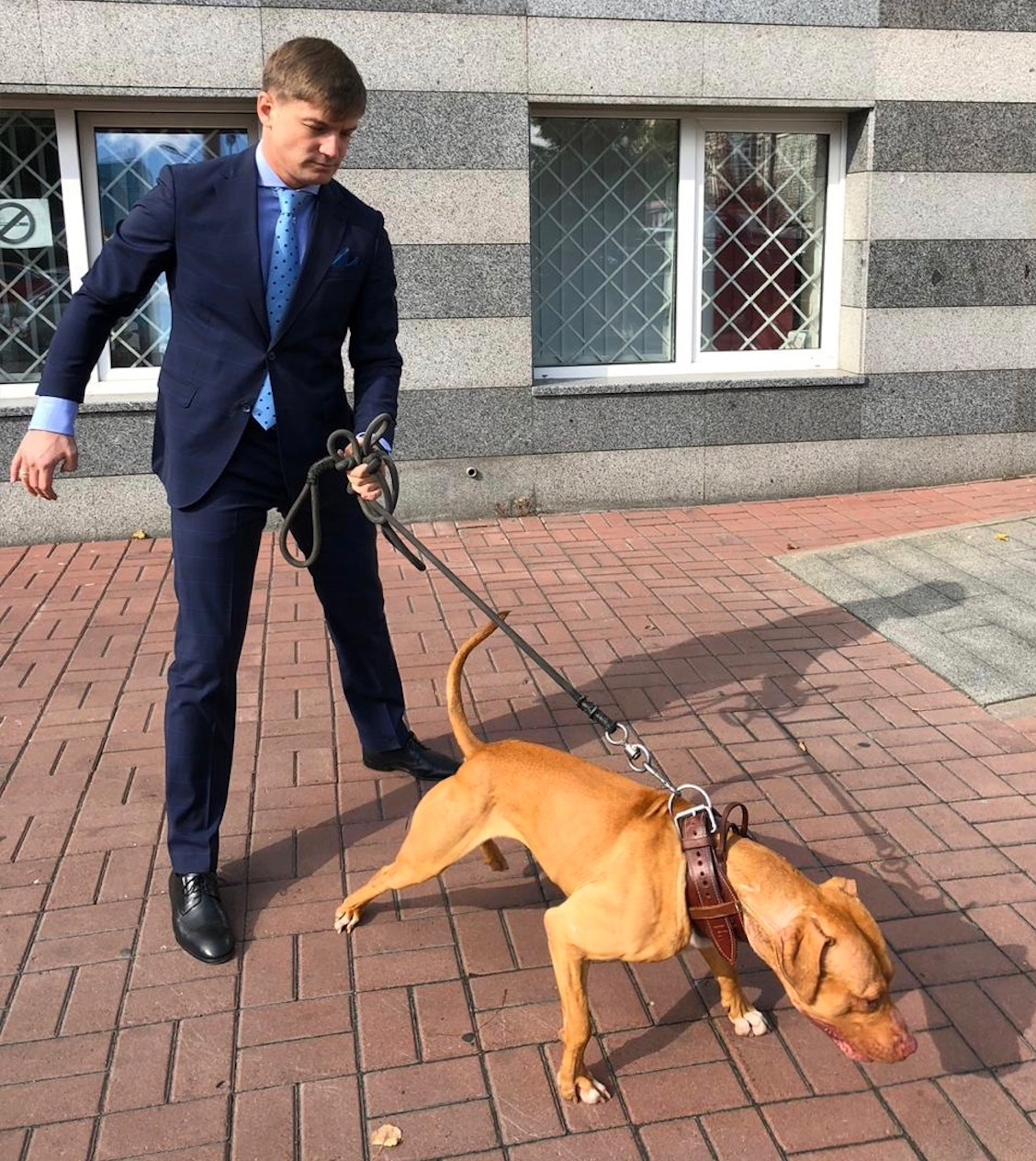 Our story in Ukraine started in 2014 before the Crimea invasion. We were working on building part of our breeding program with a partner, a renowned lawyer name Nicola Kovalchuk, as he was impressed to see Copperday in Kyiv. 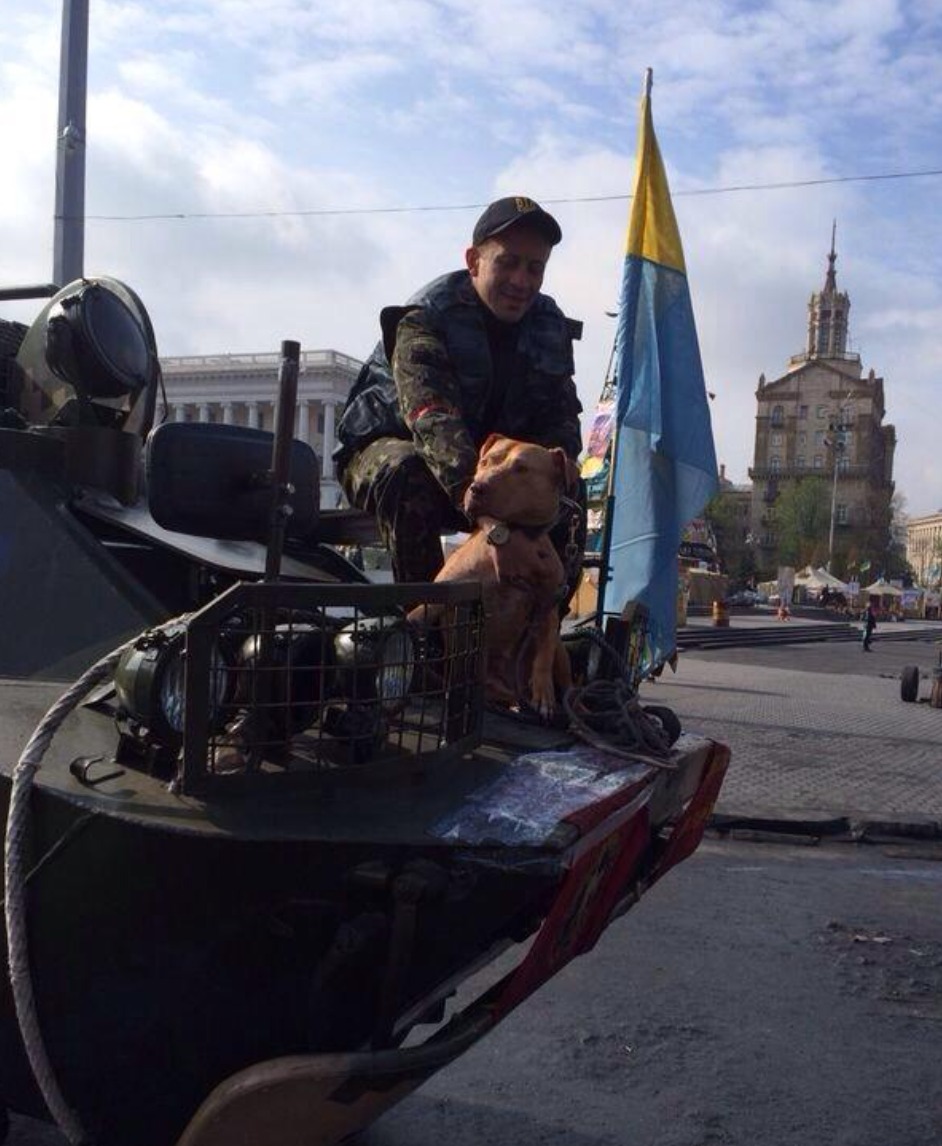 So we decided to send Deadly Speed pregnant of Mechanic Buck to Ukraine.
All the puppies in the litter were sounded, intelligent, fast, and athletic. They were raised and developed as family dogs to improve the quality of our great animals.
The locals in Kyiv loved to see them near Independence Square on weekends among famous and influential people. The goal was to show the qualities of the Real APBT that originated in America, bred in Brasil and born in Ukraine. The dogs travel throughout Europe on family trips and always show with honor the outstanding characteristics of our bloodline.

Feb 24, 2022, all the major Tv cables and news were running 24 hours, reporting the brutal invasion. Russians were coming for Kyiv.
Chico Lopez asked Nicola to please leave the city to preserve the lives of the four children and the dogs.
By the time Nicola reacted, the cars were packed with children from neighbors, and the dogs had to stay in his home in Bucha. The horror stories of human genocide and the faith of those two APBTs would unfold. Athos and Rakata lived thru the battles of Bucha during the military operation ordered by Russian President Vladimir Putin on the invasion of Ukraine.

Nicola made a deal with the neighbor Victor and Valentina to feed the dogs on his house. The two dogs were pets and ran alone the property made of 4 major buildings.

Bucha was under siege by the Russians.
The Russian army killed all men under 50, many children and women were raped and murdered. Bombs and rockets were landing all over the city, and the key airport of Bucha was within walking distance.

The question from Brasil was, are you guys ok?
Are the dogs alive? After a few days, the feeding was irregular for the dogs. Yet they were alive. You could hear lots of bombing at night, tanks, and loud war battle noise, tremors from rockers hitting buildings.

After over a month of war and the loss of property and human lives, the retrieval of Russians was imminent. The Ukrainian army won the brutal battle of Bucha, leaving the city with burned tanks and dead bodies in the middle of the streets.
Russian soldiers went to loot houses, taking toilets, washing machines, and TV, etc.
Over a month, they missed visiting the Kovalchuk’s home.

On the days before leaving Bucha, they found a nice house to steal, yet the dogs were waiting for them. Athos and Rakata would protect their home, all out natural instincts; they were never trained for protection.

Russians came back with grenades and firepower. They killed Rakata with a grenade as the neighbors watched from their windows.
We receive a call, “Chico, sad news, Athos and Rakata are dead.”
We were devastated. We loved these dogs, which were pivotal to the breeding program.

The next day got another call. Rakata was buried with a rose 🌹 stick holding the grenade pin that killed her. Yet Athos was alive and badly hurt by the blast 💥 running around the property. Barking and still engaging the Russian soldiers who stood for a night in the house.

Valentina cries as she says they heard the gunshots from the house. The soldiers left as Athos would come in and out to remove them. He was a master genius, and it was insane to think he had a strategic plan to get them out. He would bark and run from building to building. As the Russians were leaving, Athos was alive and in bad shape.

Chico was pushing from Brasil to send the Ukrainian soldiers to save him.
Many calls were made to Kyiv, yet it was hard to get there. The road was not safe; however, another hero came into the picture. Roman knew him as a puppy; a powerful politician working with the army put a group of soldiers and territorial defenders. He recorded on video of his trip from the capital to Bucha a sad picture of burned buildings, dead civilians, and crushed cars on a rainy morning.
They found the property with open gates, and to his shock and tears, Athos was alive. The champion of Hope was there, patiently waiting for the family. The neighborhood rushed to see him as they knew he put up a hard fight.

What a dog. In a chapter from a movie script, Athos became Athos from Bucha! Roman hurried nearby Oblast to the Vet clinic. He went to several surgeries to remove the particles of the grenades. Nicola traveled two days after a month to see him. He has spent a small fortune on his care. Among soldiers and tears of joy, Athos was alive.

“Saving the General” Athos
It was hard and getting worst in Ukraine. No gas, no food. Athos was recovering, yet deserved more. Chico told me, you need to let me save him; we can’t afford to lose him. From Brasil to Warsaw-Poland to Medyka border hours driving. The Dogman was on his way to rescue the warrior, a lifetime classic of what old dogmen all have dreamed.

Nicola was doing a heroic job, helping soldiers, children, and the boxing community in Ukraine. Coordinating such a dangerous trip during those days was all thanks to his clever logistics.

Athos would go out to visit Bucha one more time. Welcomed by everyone that knew him in the neighborhood; reporters from other nations wanted to meet such a brave Ukrainian dog. Such a loving hard kisser to everyone, looking hurt on the outside yet unbroken inside.
He walked tall, secure, never a victim, and inspired the people.
Roman, Valentino, and Nicola came for goodbye for now. The captain of Lots airlines in Warsaw said Open the waters, a Ukrainian hero is coming into the airplane ✈️ as he upgraded and invited us to the Coptic.

Athos was welcome in Miami by Alice and the legendary Victor AYCART, who said this was too important not to be there!

Athos is healthy and inspirational. His journey is far from over, as he will produce lots of our great animals as himself. His footprint will be on the glorious lines of The Real American Pit Bull Terrier.
Many of his puppies will live with war veterans in Ukraine and the USA. Adding value is essential, and the breed’s future depends on the men and their vision, the quality of the breeding decisions, and the capacity to work with the best Genetics.

I am sure Athos from Bucha will add glory to the pedigrees of many legends in the future. Long lives the Real American Pit Bull Terrier.