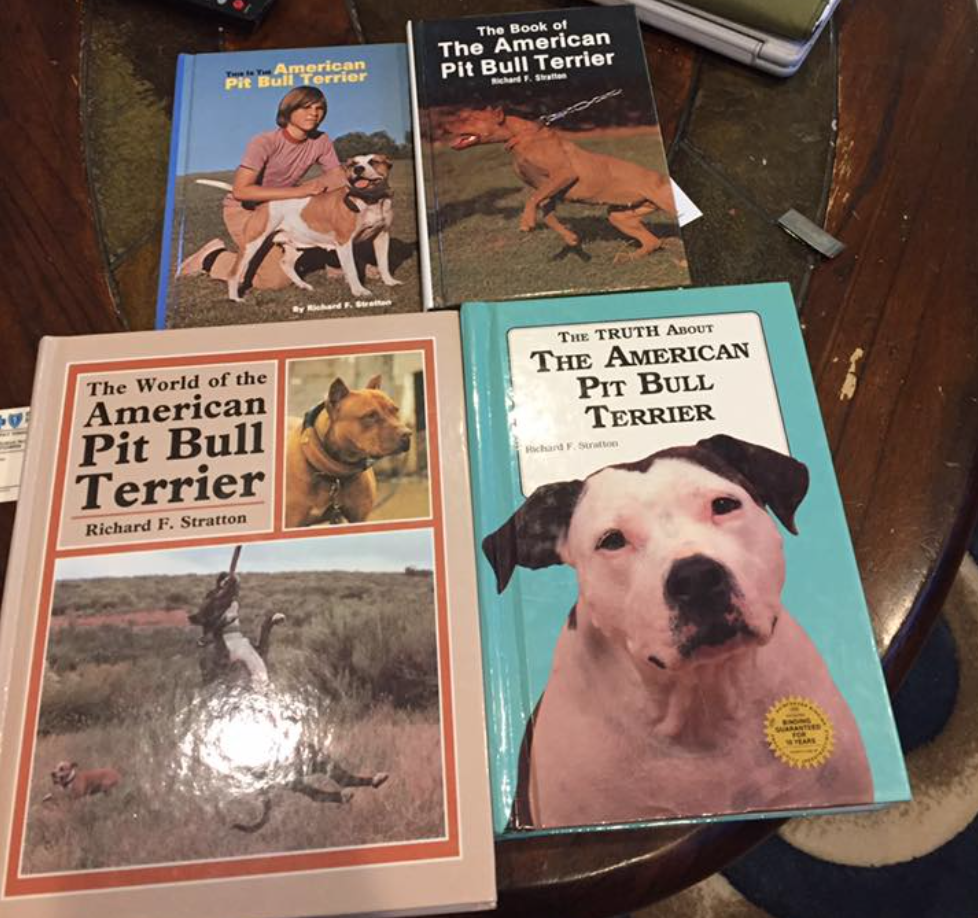 Buy Richard Stratton Books and buy a pup from Champion The Bagman TODAY !

A very important historian and book writer of the breed. His participation on the breed has been instrumental, as his articles in multiple magazines and books have been for many the gate way into understanding the basics of the breed.

We frist meet  around 1998 at an ADBA conformation show  in New York. It was my roots and I was exited to meet him and see these type of events that promote the breed in a positive way. 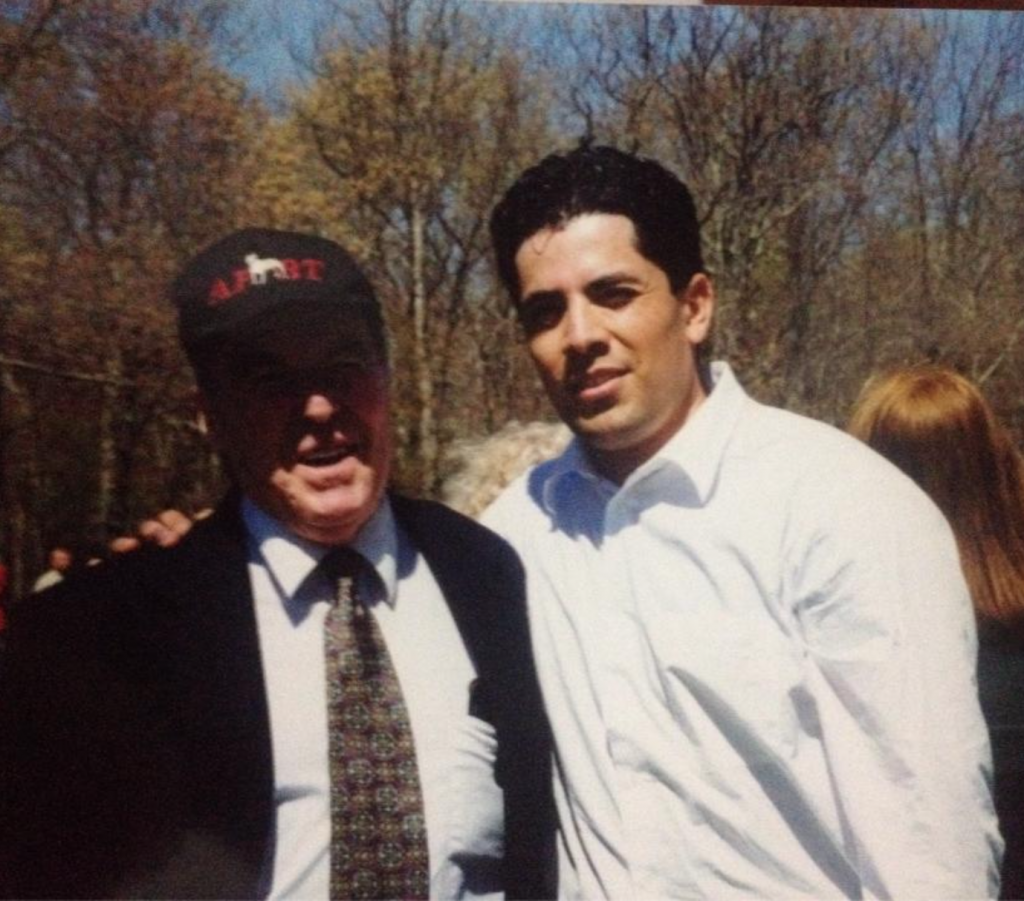 Mr. Stratton Recently wrote a nice article where he comment one of our TOP stud dogs. No other than the world records breaker;

The thug A war Champion THE BAGMAN!! 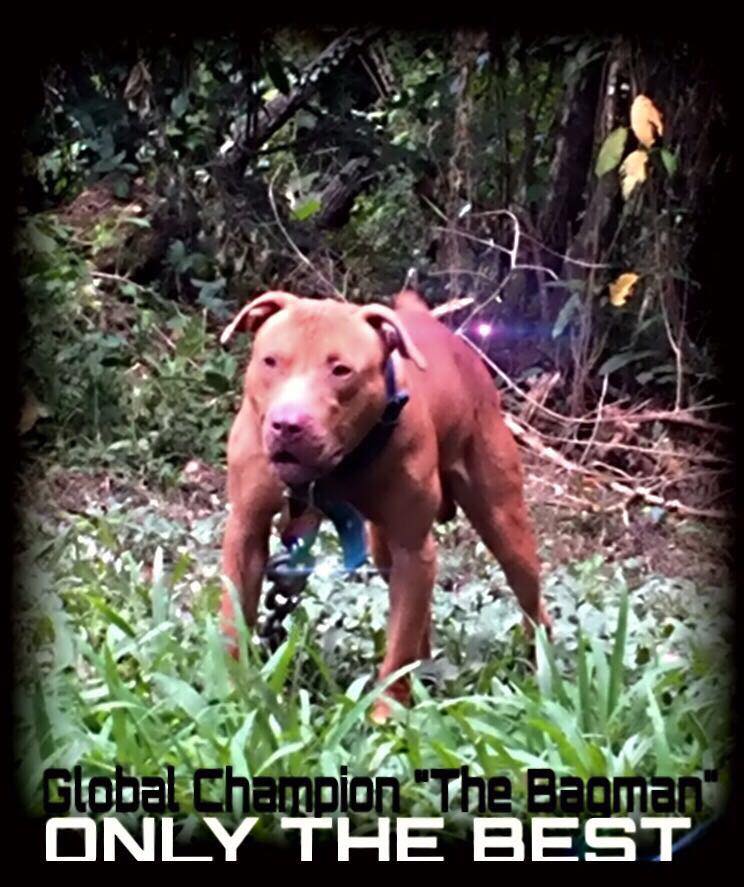 A Modern Champion of the Old Family Red Strain

I am often asked if the Old Family Red Nose line is still a game strain or is it a passion of neophytes.  Well, it’s a little of both.  It is certainly true that the red nose coloration is very popular with those new to the breed.  I am partly responsible for that, as I wrote quite a bit about it in my books.  Also, a large OFRN dog was featured in the movie Flash Dance, which was quite a popular movie in its day.

There was a time when adherents of the line were frustrated that any dog that showed that coloration was considered a member of the OFRN line.  To be considered a member of that strain, the common belief was that Centipede, Lighthouse Vick, Owen’s Tanner, Harvey’s Red Devil, and Cyclone should be in the pedigree.  But those dogs were way back in the twenties, thirties, and forties.  The great Centipede’s owner was a member of a big name band, and he was on the road a lot, so he got dog people friends of his to keep him for him, but he was quite generous about allowing breeding to the dog.  Ferguson, Centipede’s owner, went off to war in the second Great War, and he died a hero’s death.  Red Howell ended up with him, and he bred him to just about everything.  That was not surprising, as Centipede was generally acknowledged the best dog of his age.

The point I am trying to make is that all of those dogs were bred so much that any of the modern day dogs that show that coloration are bound to have those dogs back in their pedigrees—and so do dogs with other colorations, but they aren’t held up as representatives of the strain!

Truth to tell, a lot of the original Old Family Red Nose dogs did not have an all red coloration, with red toe nails and fiery red eyes.  D. A. McClintock, Bob Hemphill, and Bob Wallace became some of the modern OFRN enthusiasts, and a lot of their dogs had white on them, or they were a color other than red, such as brindle, with the red nose.  It is kind of ironic that a lot of these dogs, including Tudor’s Fighting Peter, Cyclone, and Centipede went through Earl Tudor’s hands, as he didn’t particularly care for the coloration.  Even Lightner, who is most credited for the origin of the strain got rid of his because he didn’t like the color, and he didn’t like that fact that they were running too big.  Oh well, a lot of the reason that these guys didn’t like that coloration was that it looked sort of freaky in those days.  People were used to seeing Bulldogs in all colorations but that!

Anyway, I just tell people who want modern OFRN dogs that are game to get dogs from game strains.  One of these modern dogs is a candidate of one of the world’s top pit dogs.  When I wrote about Grand Champion Titere, who is often credited with being the top dog in the world, I emphasized that it is difficult to really determine such things.  But The Bagman is a definite candidate, too, and he is a fine specimen of that grand old bloodline.  (I think the best way to think about the OFRN line now is as a branching line, with some branching out to show dogs and some to pets, while others branch into various game dog lines.  Of course, dogs from the game lines can be pets, too—in fact, they are usually the best in that regard!

Anyway, let me tell you about The Bagman.  This is a great Bulldog in every sense of the word.  He is smart, and he has freaky athletic ability—and he can’t be made to bite a person, as his disposition is just that good.

The pups he has sired all look like him, nearly exact replicas.  If they turn out like him, a storm is coming because The Bagman is something special, an international champion.  He has it all: gameness, smarts, and crazy ability.  It will be interesting to see how he will rate as a producer, but he should do well, as he has quality breeding behind him.

The Bagman got his championship in just under four months in three different countries, including South America, Mexico, and Europe.  During his tug A war competitions he polished off his first two opponent in short order: 14 minutes and 22 minutes.  But his third challenger was something special, and it took The Bagman an hour and fifty-five minutes to best him.

Obviously, The Bagman is something special himself, and I think we will be hearing about him as a producer in the future.  Those who want game Old Family Red Nose dogs need look no further. 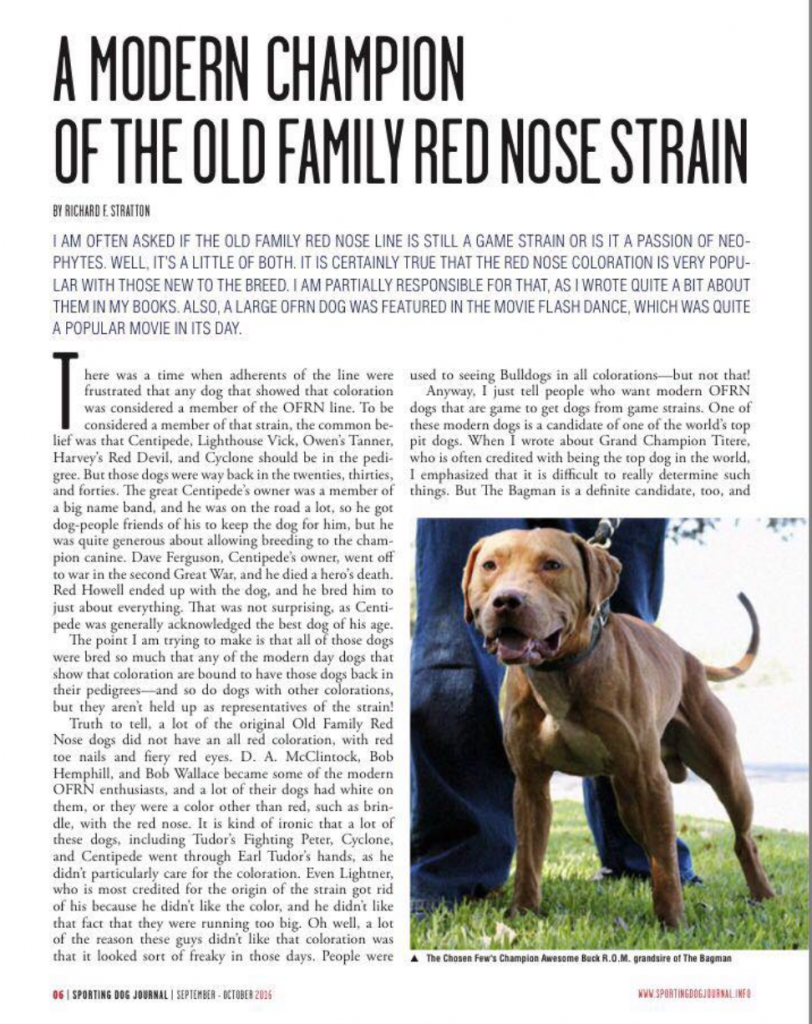 THE BAGMAN IS THE MODERN OLD FAMILY RED NOSE 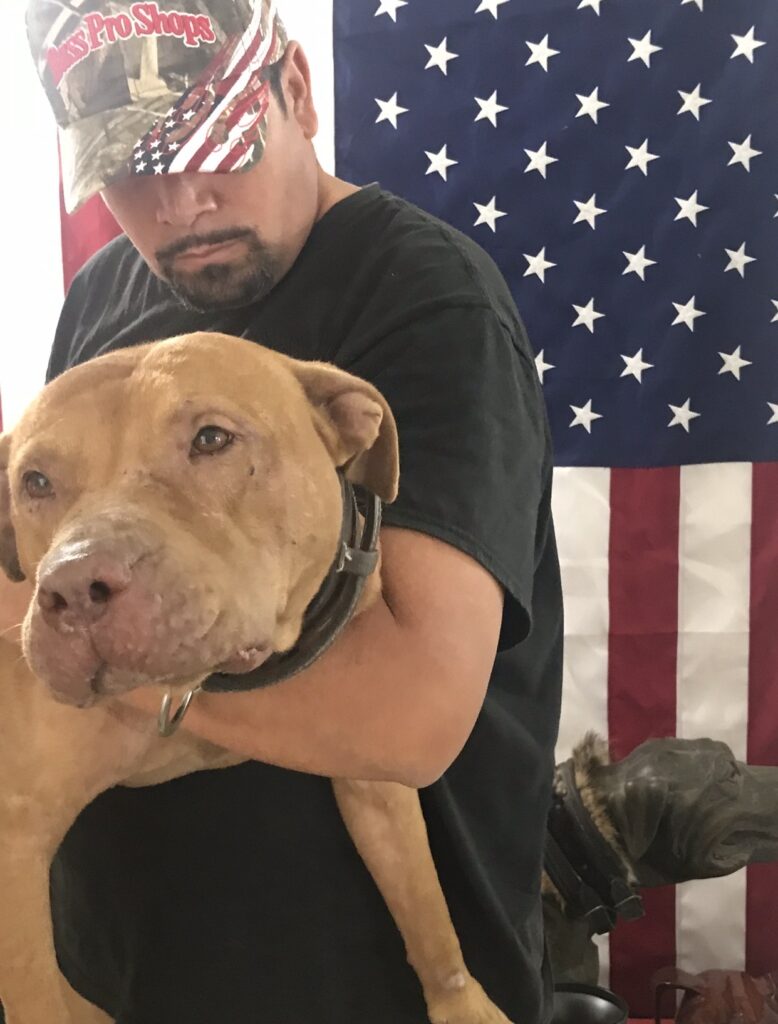