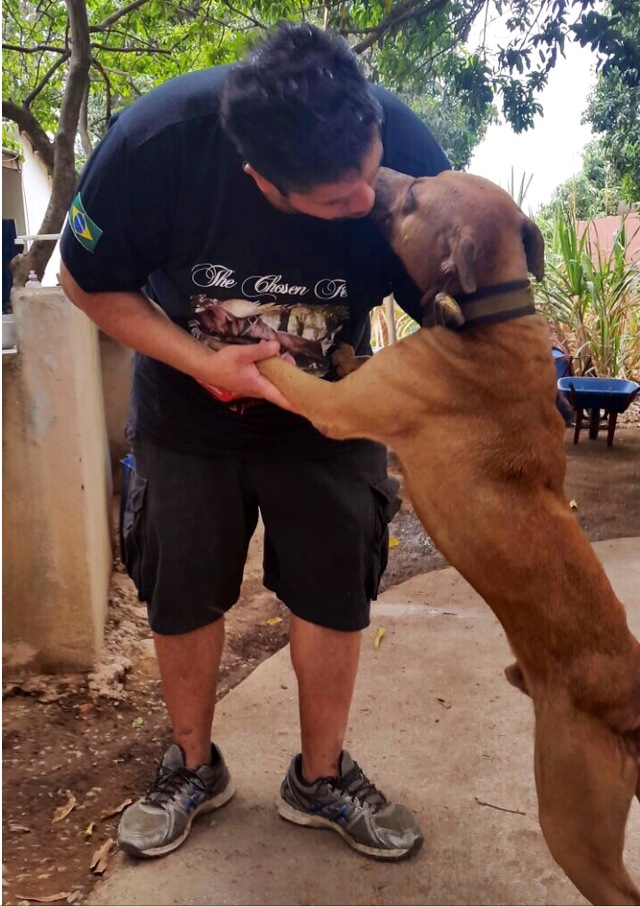 A great sample of The Real American Pit Bull Terrier.  Perfect Conformation, body structure, amazing temperament with humans, NOT a pack animal, and super athletic.   This dogs has been in several articles and in magazines, videos showing great affection and being playful. 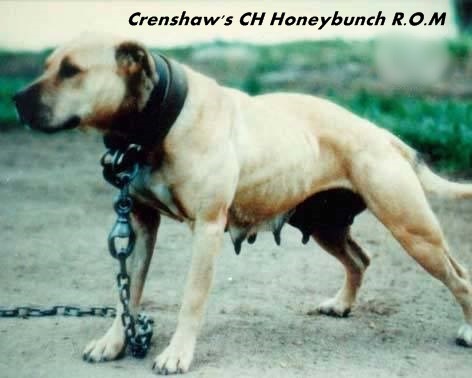 THE STORY OF HONEYBUNCH

Ch Crenshaw’s Honeybunch R.O.M was born at Maurice Carver’s Kennel and was daughter of famed Walling’s Bullyson R.O.M and Carver’s Amber R.O.M. Both dogs belonged to Maurice Carver. In 1972 James Crenshaw bought Honeybunch as a puppy from Maurice Carver and told him: this puppy has everything to become a fundamental pivot in American Pitbull Terrier selection and she did do justice to this notion. Honeybunch established her reign in dog fighting winning 3 games against the best bitches of that time.

A person who had direct experience of Honeybunch’s incredible biting strength is Rex B. Rex the judge of one of her matches. Whilst Irish Jerry was separating the two dogs by unfanging them with a breaking stick Honeybunch locked onto Rex’s thumb. The Good old Mountain Man had to replace Rex as a judge. Rex on the other hand, not the type of person to complain suffered in silence with the understanding of why the Hispanics call the thumb “ the fat finger”.

Summing up all the matches of Honeybunch’s offspring, the figure of 65 fights without any losses comes to light. If one analysizes an American Pitbull Terrier ADBA Pedigree, going back in the generations we will always find one of her offspring.

Her fame was made possible thanks to the strict and selective contribution of James Crenshaw, James Garrett. Maurice Carver, Jack Kelly, Gene Smith, George Wilcox, Mark Stower, Don Mayfield and Mountain Man. Known for her surprising capacity to produce and for her formidable qualities as a fighter, Ch Crenshaw’s Honeybunch R.O.M is considered the most influential American Pitbull Terrier bitches of her time.

Brasil 2015 after a long day of work, Thais is checking messages. Mechanic Buck ROM got loose and run right to her arms. You will see the deep connection among them.  If you own a grand son of his , now you know why they are some nice and loving.

Mechanic Buck AKA Britador, AKA The Butchers knife love to spend time with us.  He spends the after noon using the bathroom and in the open skies on a chain as the other dogs.  Contrary to the opinion of common so called experts, the time on the chains did not affect the mood of our dogs. In the contrary , makes them healthier and released the extra energy.

This is the “Real American Pit Bull Terrier” The temperament is love and high controlled energy.  This is possible because, great selection.